Berserker is one of the classes in Bless Online.

About the Berserker class[edit | edit source]

Berserker, king of the battlefield

Berserkers brandish a big and powerful two-handed axe and they wear sturdy armor in order to receive their enemy’s attacks with their bodies. Berserkers are intoxicated by the high they feel when they fight with their life on the line, and at times they even think that combat is the purpose of life. With a fighting spirit that’s close to madness dominating their whole body, even if their limbs were cut off, berserkers would feel rage instead of fear and before attacking their enemy. Berserkers are talented in attacking multiple enemies at once while brandishing their two-handed axe.

Berserkers can quickly eliminate their enemies through a torrent of speedy and powerful attacks. They are also used to facing multiple opponents alone. Aside from the axe, berserkers can also use their bodies as weapons and they are experts in outwitting their opponents with unconventional attacks. To berserkers, defense is nothing more than the time used to prepare for the next attack, and they will never hesitate to give up their own flesh if it means that they can break their enemy’s bones. Since berserkers prefer a heavy combat style, it is of utmost importance when fighting alone that they knock down their opponent before they start attacking. In group combat, although berserkers are mainly in charge of attacking, they can also partially take on defensive roles since they wear heavy armor. Berserkers protect their comrades by making the enemy attack himself first through powerful attacks, provocation, and ridicule. However when there is no guardian, as long as it is not a special case, berserkers usually concentrate on inflicting heavy damage to enemies. The berserker’s ability to inflict serious damage to multiple enemies at once is useful in a variety of ways.

In order to disturb enemy camps and carry out direct attacks, berserkers make use of firm armor and huge two handed axes. 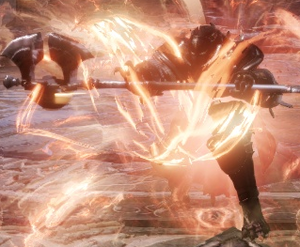 - Chances of dodging increases by 0.4% per part - Fighting power increases by 3% and 10 energy is gained when dodging if 7 parts are equipped

The resource used by Berserker

During combat, berserkers acquire “Anger”. Core skills could be activated once maximum Anger value has been reached, but Anger decreases when combat ends. An important thing to consider as a berserker in combat is the time it takes to acquire maximum Anger with various skill combinations, hence the power and the amount of anger gained must be used well in battle.

The Berserker’s Defensive mechanism is Roll. While consuming energy you can dodge attacks by rolling to the front, and crowd control effects (stun etc.) are removed. 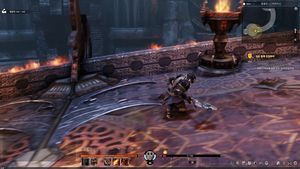 A Berserker using the Roll ability

To use Roll you have to press the Shift key on your keyboard and 20 energy is consumed upon use. 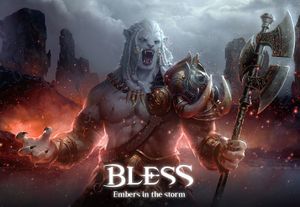 “Death is like a starving stray dog, it shows up at the smell of fear. If you want to remain alive in the battlefield you must stand bravely, glare, and shout, before kicking the escaping fear in the face“ - Warrior King Verbeek of Drey Zinen

Berserkers are the descendants of barbarian Altoque warriors that once threatened the Lumen Empire. Among those who were led by fate to the battlefield, brave warriors who were born without fear are those who choose the road of a berserker. Berserkers are intoxicated by the high they feel when they fight with their life on the line, and at times they think that that is the purpose of life.