Paladin is one of the classes in Bless Online.

About the Paladin class[edit | edit source]

Paladins are proficient at employing temple martial arts using an iron mace and a shield (a harsh training that goes beyond human capabilities) and the power granted by Providence in battle.

Paladins possess the ability to heal themselves and their allies.

They can help their comrades by bestowing beneficial effects to their allies and harmful ones to their enemies. If paladins are to face an enemy alone, they will switch over to their core attack skills, enhance their weapon with the power of God, and attack their enemy with their powerful weapon.

In order to use a variety of skills, the paladin is a class that requires a lot of mana. Mana increases as the paladin develops, but may also increase according to their equipment. The ability to manage mana when attacking enemies and assisting one’s allies is the paladin’s most important skill. 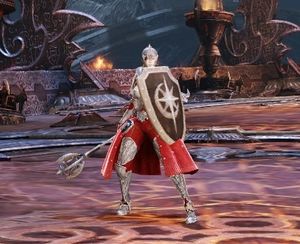 The paladin, who uses both blessings and curses simultaneously during combat, equips a powerful iron mace and firm armor.

The resource used by Paladins

Paladins use “mana” when in combat. Mana naturally recovers with time, but the recovery process can be sped up through certain skills. Mana is consumed when healing allies, inflicting magical damage and applying status effects.

All harmful status effects are removed when activated and you will become immune to physical status effects such as damage, crowd control effect, and floating. The paladin’s health will continue to recover and paladin will be immune from damage. This skill is activated for as long as you press the activation key, but once all your energy has been consumed, the skill will once again become inactive. 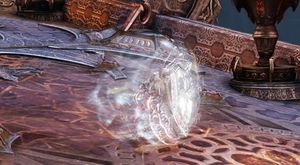 A Paladin using the Endure ability

To use Endurance you have to press the Shift key on your keyboard and 30 energy would be consumed upon use with 10 energy per second being consumed for as long as it is activated.

“For three years, either in the temple or the monastery, you study the doctrine of Physis along with the natural language and the language of the ancient Lumen. Afterward, you become a monk and endure five years of difficult training. Regardless of the season, monks always live barefoot and fast for a week every month. The last two years are spent in silent meditation.

Once you successfully complete the whole process you will become an ordained priest and hold the ability to exercise the power given to Physis’ disciples. Now you may ask “How can I become a crusader?” Only after completing five more years of meditation as guided by the temple will you finally become a crusader.

Anyways, since throughout the whole process all you have to do is do as you are told, it isn’t too hard at all.” -Wolfgang, Vice-Captain of the Kustos Crusaders 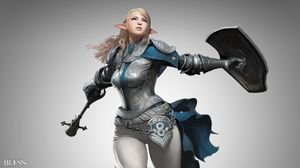 Even after finishing years of difficult meditation and becoming officially ordinated as a priest, only those who are particularly strong physically and mentally qualified to apply to be a crusader. Applicants must be proficient at employing temple martial arts (a harsh training that uses an iron mace and shield that goes beyond human capabilities) and the power granted by providence in battle. Just like a priest, a crusader must swear honest poverty, celibacy, and obedience, and they must live solely for practicing and protecting Physis’ law. By combining all of a priests’ power such as healing, resurrection, and blessing with physical combat ability, a crusader will become a difficult enemy but reliable ally. Depending on the situation, the crusader, who wears sturdy metal armor, can support his allies either from the rear or by fighting enemies on the front line.